Our Quality - Reliable - Responsible Company ATEŞ İNŞAAT SANAYİ VE TİCARET A.Ş. is a well-established company in Adana, 1969. It closely follows technology, prepares its product range to meet the needs of the consumer, and has a dynamic structure that constantly improves its product range.

ATEŞ A.Ş has strong stock capacity; it stores products in its facility exceeding 40 thousand m² in total and can coordinate fast and safe shipments to all provinces of Turkey with its large fleet of vehicles.

Within the R & D personnel and professional marketing team, serving across Turkey is constantly monitoring customer needs and expectations. It quickly resolves problems and offers stability to its business partners on the basis of product supply.

We continue to work with our quality, reliable and responsible company awareness and we instill this principle in our future generations. 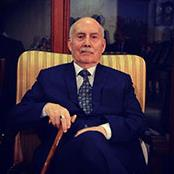 CHAIRMAN OF THE BOARD

Hacı Nazım Turgut was born in Darende district of Malatya in 1938. Moving to Adana in 1950, he continued his education and started business life at a young age.

Nazım Turgut, who started the Ateş Group of Companies with himself and his two sons from a single source, continued his business life actively until 2018. With a rising momentum, he has succeeded in making ATEŞ A.Ş name known not only in Turkey, also in many parts of the world.

Nazım Turgut, known for his philanthropy in addition to his success in business life, has been a pioneer in many constructions. Apart from the permanent works he donated and built mosques, schools and Quran courses, he has always been with people in need of help.

A few of his social enterprises are as follows;

Nazım Turgut, who served as Honorary President of DASEV, where he pioneered the establishment, wrote the book "Happiness" in which he told his life and experiences to the next generations.

Nazım Turgut, who always emphasizes the importance of sharing, has had an 80 year full of trade and social services, and he passed away in February 2018.